The Whoopers Are Here 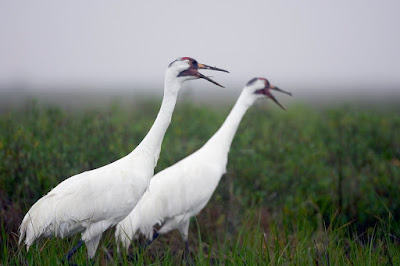 Staff at Goose Island State Park in Rockport announced Thursday that they’ve spotted the first whooping cranes of the season.

“These two whooping cranes are the first arrivals at the park this season, and we couldn’t be more excited to welcome them back down south,” the park posted on social media. “They were spotted this morning from the bird viewing platform next to the day use area.”

In 1942, there were only 16 whooping cranes left in what was to be the last flock in the world, a small group of birds that wintered on the central Texas coast near Rockport and nested in northwestern Canada. Throughout the 1940s and 1950s, this last remaining band of whooping cranes still precipitously clung to existence with numbers in the 20s and 30s. Slowly, over time, with habitat conservation and protection from shooting, numbers climbed. In 2012, the Texas-Canada flock approached 300 birds, and now whooping cranes also exist in several experimental flocks and captive breeding facilities.

While the traditional wintering grounds on and near Aransas National Wildlife Refuge are well-known, biologists have much less information about locations used by whooping cranes in migration. In addition, as the whooping crane population continues to grow, whoopers are beginning to explore new wintering habitat away from traditional areas.

Texas Whooper Watch seeks the help of citizen scientists in identifying whooping crane migration stopover sites and non-traditional wintering areas, in assessing whether any hazards exist to whoopers at these sites, and in learning more about behavior and habitat use at these sites.

If you spot a whooping crane, first visit Is it a whooping crane? to double-check your identification. If you believe your ID is correct, then use iNaturalist to post observations of whooping cranes in Texas. There’s a project set up specifically for this. 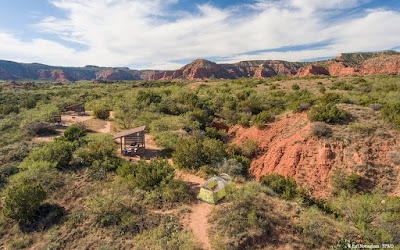 In the upcoming November election, Texans will have the opportunity to vote on Proposition 5, which would dedicate 100 percent of sporting goods sales tax to Texas state parks and historic sites. Early voting begins Monday, Oct 21. Here are the details.

The Sporting Goods Sales Tax (SGST) is the portion of state sales taxes collected from the sale of sporting goods in Texas. It is neither a new tax nor will it raise taxes. State law currently authorizes the Legislature to make appropriations from the collection of sales taxes on sporting goods to support state parks, historic sites and local park grants, and Prop 5 constitutionally dedicates these funds to TPWD and THC. The allocation of the funds would be split 93 percent to TPWD and 7 percent to THC.

Dedicated appropriations from the SGST would ensure a reliable and predictable source of funding to keep not only state parks and historic sites safe and in working order, but allows TPWD and THC to provide new outdoor recreational opportunities to meet the demands of a growing state.

Funding from the SGST would allow for millions of dollars to be dedicated toward the creation and continuing development of city, county and neighborhood parks through TPWD’s local park grant program. These grants help secure the future of local parks, ensuring they will be available for generations of families in Texas to enjoy.

Additionally, the funding could help build and open undeveloped sites owned by TPWD, including the Albert and Bessie Kronkosky State Natural Area between Kendall and Bandera County, Davis Hill State Park in Liberty County, Chinati Mountains State Natural Area in Presidio County, the Dan A. Hughes Unit of Devils River State Natural Area in Val Verde County and acreage adjacent to the Powderhorn Wildlife Management Area in Calhoun County slated to be transferred to TPWD for future development as a state park.

A list of on-going and completed repair and improvement projects at state parks across Texas can be found online at http://texasstateparks.org/brighterfuture.

For more information on the Nov. 5 election, visit the Texas Secretary of State’s website at https://www.votetexas.gov. 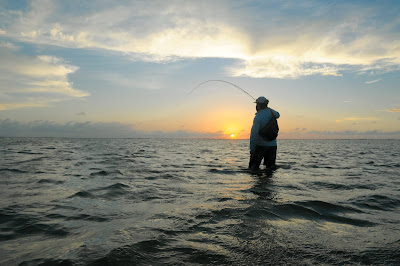 There’s a place in Texas where legends are born: the land of giant spotted seatrout. Putting your hands on a trophy spotted seatrout from these waters requires dogged resolve and devoted patience.

Nevertheless, for the determined, there’s no better environment. A hypersaline bay within the upper Laguna Madre complex, Baffin Bay is world class when it comes to trophy spotted seatrout angling.

While others are chasing red drum and flounder runs in October, Baffin Bay anglers don’t miss a beat and target spotted seatrout. Because of the cooler temperatures, calmer winds and fewer boaters, the fall months tend to rate highly in spotted seatrout anglers’ minds.

Cut off from the outside world by the famous King and Kenedy ranches, the bay is literally off the beaten path. The only direct access to the system is at Riviera Beach on the extreme western end of the bay. The next closest launch is about 15 miles north toward Corpus Christi from the mouth of the bay. That doesn’t deter those seeking a world-class angling adventure.

Famous landmarks such as the Badlands, Starvation Point, Black Bluff and Point of Rocks all give some trepidation to new visitors, mainly because they are named for rock-hard patch reefs. These celebrated sites provide vertical hard structure to an otherwise open mud/sand bottom. To some, Baffin Bay is a real pain to fish; to others, it’s an indulgence. The silence can be deafening, but the trophy spotted seatrout fishing is second to none.

Posted by Texas Parks & Wildlife magazine at 12:30 No comments:

Good news: Numbers appear to be greater than last year 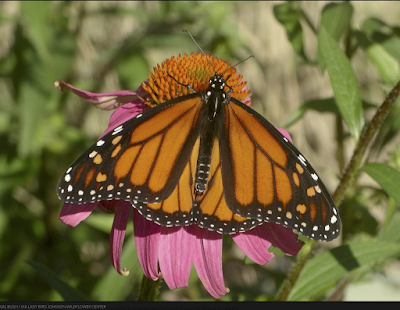 A recent cool front brought migrating monarchs into Texas this week. The butterflies are on their way to wintering grounds in Mexico in numbers large enough to be picked up on weather radar. Enthusiasts are cautiously optimistic about the size of the monarch “crowd” this year.

While that’s seemingly good news, there is concern that recent drought conditions may leave less than ample food sources for these beloved flutterers, who travel in multiple generations each year from Mexico to Canada and back again.

Texas is critical to the later stages of their migration since it is here they fuel up and build the fat stores that will get them through the winter. While the monarchs are here, biologists will be busy tagging and tracking them.

What can you do to help monarchs along the way? It’s too late this year, but you can set aside a corner of your yard for nectar plants and native milkweed for next year. Milkweed is helpful in the spring, as it gives monarchs a nest for their eggs, while nectar plants provide energy for both their fall and spring migrations.

Win the Hunt of a Lifetime 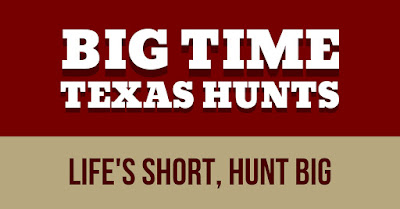 October 15 is the last day to enter our Big Time Texas Hunts drawing at bit.ly/HuntBIG. Enter for a chance to win premium hunt packages on some of the finest private ranches and prime wildlife management areas in Texas. Proceeds support wildlife conservation, habitat management and public hunting.