Here’s everything you need to know about testing your fall harvest for a deadly disease. 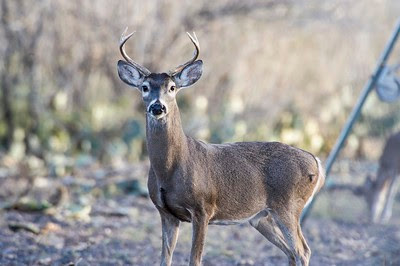 Why? Hundreds of captive or free-ranging deer in 16 Texas counties have tested positive for chronic wasting disease (CWD) over the past decade. If left unmanaged, CWD can have catastrophic, long-term impacts on the most beloved game animal in the state.

How? If you’re deer hunting in Texas this fall, test your harvest for CWD. It’s mandatory in CWD zones and voluntary elsewhere. With your participation, biologists can gather statewide data to aid in CWD management strategies to reduce the risk of CWD spread.

Where? CWD containment and surveillance zones are found in various areas across the state. These zones have special rules, including mandatory testing. See map below.

You can find everything you need to know at the Texas Parks and Wildlife Department or Outdoor Annual websites.

Why sample for CWD?

Surveillance is an essential part of managing CWD. Testing for CWD allows wildlife biologists and animal health officials to get a clearer picture of the prevalence and distribution of the disease across Texas. Proactive monitoring improves the state’s response time to a CWD detection and can reduce the risk of the disease further spreading to neighboring deer populations. With each discovery of a new CWD-positive area in the state, CWD zones are established as a strategy to manage and contain the disease.

Which counties have mandatory testing?

So far, the only areas in Texas where CWD has become established within native deer populations are in the northern portions of El Paso and Hudspeth counties in far West Texas and in western Dallam and Hartley counties in the northwest Texas Panhandle. CWD has also been detected in multiple deer-breeding facilities across the state, and on some properties neighboring those CWD-positive deer-breeding facilities in Medina and Uvalde counties. Testing within established CWD zones will help determine the geographic distribution and prevalence of the disease, or in some cases, confirm that the disease has not been established outside of captive-deer facilities.

To see if your hunting location is in a CWD zone, check the map at the TPWD website. If you harvest a deer in a CWD Zone, it is mandatory to bring the deer to a check station within 48 hours of harvest to have a CWD sample collected from that deer.  There are no exceptions to the regulation.

Where is the nearest check station?

What do I need to bring to the check station?

TPWD staff will collect a tissue sample from the head of the deer for testing purposes. The head may be attached to the carcass or separated. If you separate the head from the carcass, it is very important to include the first two to three vertebrae to keep the necessary samples intact. Place the head in a plastic trash bag and keep it cool (but not frozen) until you get to the station.

Can I take my deer out of a CWD zone?

There are restrictions on which parts of a harvested deer may be transported outside of a CWD zone to help prevent the unnatural spread of CWD.

Parts that may be transported from a zone include:

Yes, TPWD will provide free CWD testing for all your hunter harvest samples.

How long does it take to get results?

How can I tell if a deer has CWD?

Only through testing. Both healthy and sick-looking deer can be CWD positive as visible symptoms do not become apparent until the terminal end-stage of the disease. An animal may be shedding infective prions well before symptoms become apparent. The disease cannot be diagnosed by symptoms alone since other diseases or conditions can cause the animal to exhibit similar symptoms.

What other precautions should I take?

Properly dispose of carcass parts. Leave inedible parts at the site of harvest, or preferably, dispose of them in a landfill or bury them on the property of harvest in any CWD zone.

Is CWD dangerous for humans?

Researchers have found no evidence that CWD poses a serious risk to humans or domestic animals. However, as a precaution, it is strongly advised to test susceptible species harvested in known CWD areas and to not eat meat from CWD positive animals or any sick animal regardless of the disease.