Migratory game bird hunters may wonder why they’re being asked a few questions when they buy their hunting licenses this year. 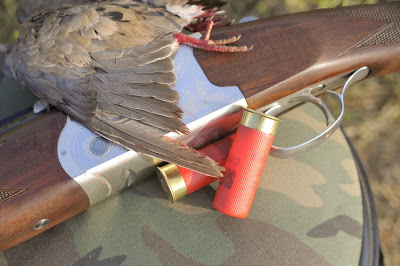 The answers to those questions, collected by the Harvest Information Program, allow biologists to estimate how many migratory game birds — for example, ducks, geese and doves — hunters harvest this year and how many hunters pursue each species.

With a half-million migratory game bird hunters, Texas has more duck and dove hunters than any other state. We play an important role in conservation, so accurate information gathering is crucial. 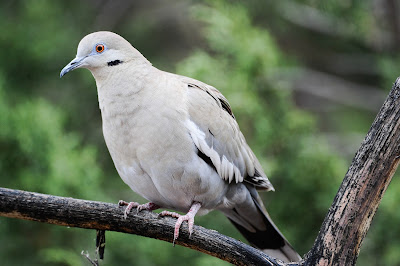 “Without question, Texas hunters have always answered the call to meet our shared stewardship of our cherished wildlife resources in this state,” says TPWD Executive Director Carter Smith. “Without HIP, we would not be able to protect our migratory game birds, manage their habitats and provide quality hunting opportunities within this state. It is an important and critical part of the license purchasing process for our migratory game bird hunters.”

A still smaller subset of hunters will be asked to provide one wing from each bird harvested during the season for the Wing Survey. Researchers can determine species, sex and age for birds harvested, as well as other limited information. This gives managers important indications of the health of bird populations. 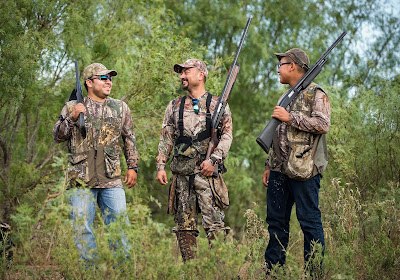 Once HIP certification is complete, proof of that completion must be carried with the hunter in the field on his or her hunting license and must be presented to a game warden, upon request. This proof of completion for Texas’ hunting license states “HIP certified,” and it’s the responsibility of the hunter to make sure he or she (1) is HIP-certified, and (2) possesses the necessary documentation while afield.

To read more about conservation and wildlife management subscribe to Texas Parks & Wildlife magazine.  For a limited time enjoy three months of digital access to 600+ articles and our expanded 2020 Summer issue - all for only $1.99!

Birding has proven to be a popular activity during the COVID-19 outbreak. It's a way to have meaningful interactions with nature while not venturing far from home. Novice and avid birdwatchers alike can participate in a little friendly competition courtesy of the 24th Annual Great Texas Birding Classic, October 1 - 31.

Although typically held in the Spring, the Classic has been moved to October to take advantage of the fall migration. It's also modifying some categories and rules to make participation easier while quarantining or limiting travel.

And you don't have to hike the forests of East Texas or climb jagged Hill Country cliffs to engage in birding and enjoy the great outdoors. As it turns out, you can find these moments in your everyday life, as Jennifer Bristol explains in her new book, Parking Lot Birding. 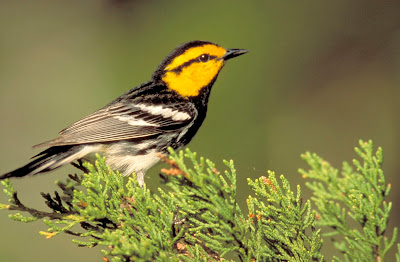 Bristol takes us to what sounds like the most unlikely of nature spots: the parking lot. Whether you’re a birding beginner or veteran, Bristol’s Parking Lot Birding is not only an entertaining read to discover Texas birds, but it also pushes you to realize sometimes the best birds are just around the corner.

Bristol, former coordinator of the Texas Children in Nature program at the Texas Parks and Wildlife Department, opens by recounting her unintentional beginnings to birding after a back injury from a bucking mustang. In an attempt to keep Bristol busy during recovery, her husband, Thomas Nilles, took her on photo safaris to photograph nature and historical sites. Eventually, this led to a sparked curiosity for birds.

“(Birding) feeds the soul — I never get tired,” Bristol said. “It’s like a scavenger hunt. Each time you go out, you never know what you’re going to find.” 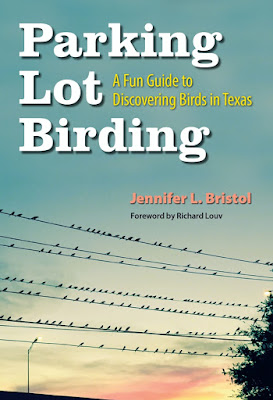 Her love affair with birding took flight, and she started taking hiking trips to find as many birds as possible, whether it be exploring the Rio Grande Valley, the Lost Pines of Bastrop State Park or other Central Texas spots. They trudged high and low, in dense forests and along rushing rivers, only to realize the best birding often happens in more unlikely places.

“I didn’t want to believe it — my ego wouldn’t allow it,” she writes. “Perhaps due to my competitive nature and my willingness to trapeze up, down, and around any obstacle far away from human-made structures, the parking lot reality offended my sense of awe and wonder for nature.”

The parking lot concept became reality after she and Nilles hiked the five-mile Wolf Mountain Trail at Pedernales Falls State Park in search of a golden-cheeked warbler, only to finally find it at the end of their hike near the parking lot. It became a running joke between her, Nilles and her mother that they only found birds in the parking lot. On a Great Texas Birding Classic trip in 2017, they had the idea for Bristol to write a book about it.

Bristol takes the reader on a journey throughout Texas, covering nine regions stretching from the coastal areas of Corpus Christi to the plains of the Panhandle. She recounts her birding experiences at 90 different sites that are open for birding endeavors, along with species numbers and amenities. She also includes a “feather fact” giving a detailed rundown of a selected bird of that region. 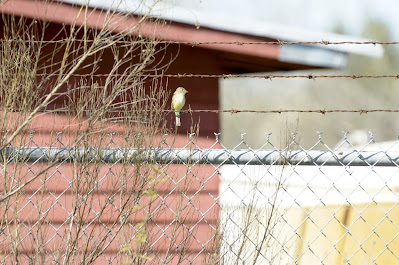 Not all of the book is facts and figures — she also occasionally spices up the descriptions with chuckle-worthy stories of trail encounters and muses over the idea that all birders seem to dress the same (i.e. teasing Nilles to ask the “guy in the tan shirt” about what he’s seeing).

The book is filled with beautiful photographs taken by Bristol and Nilles. Readers can check out birds such as the black-necked stilt, long-billed dowitcher and American bittern as well as the roseate spoonbill, painted bunting and black skimmer.

Bristol hopes readers understand Texas has one of the biggest migrations of any animal in the world.

“A lot of people book birding trips to Belize and Costa Rica, and that’s all great,” Bristol said. “But there’s other people who come from other places in the world to Texas. This is right in our backyard, and we’ve got front row seats to it.”

Bristol’s book is a reminder of the easily accessible doorway to nature — just a stroll to your car or a look out the window to catch a glimpse of the wider world of nature.

On the Centennial of Women’s Right to Vote, We Honor 20 'Wild Women' of Conservation

In 1848, suffragists began their organized fight for women’s equality when they demanded the right to vote during the first women’s rights convention in Seneca Falls, New York. For the next 72 years, women leaders lobbied, marched, picketed and protested for the right to the ballot. 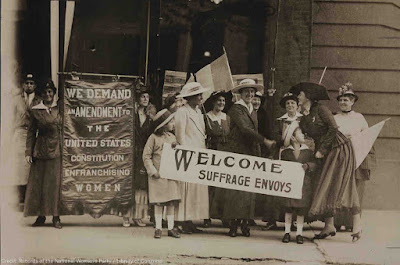 © Records of the National Woman's Party

The U.S. House of Representatives finally approved the Susan B. Anthony Amendment, which guaranteed women the right to vote, on May 21, 1919. The U.S. Senate followed two weeks later, and the 19th Amendment went to the states. Tennessee became the last state needed to ratify on August 18, 1920.

Today, more than 68 million women vote in elections because of the courageous suffragists who never gave up the fight for equality.

Early Texas women fought for more than the right to vote. Long before they stepped into the ballot box, they led explorers across rivers and forests, helped preserve great swaths of land, protected the state’s flora and fauna and tamed the wilderness. The land was wild, but they were wilder.

To honor them and the suffragettes, we chose (through an exhaustive process) 20 women of Texas conservation to feature in our 2020 issues. We called them Wild Women. 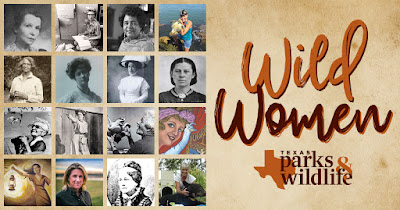 Before we introduce you to the remarkable women we’ve introduced since January, how about a sneak peek at our October Wild Women?

Two more issues to go. Five more Wild Women to make 20 heroes for 2020. Who do you think our next Wild Women should be? Hint: November is a big month for politics….

Here’s a look back on the truly remarkable Texas women we’ve featured so far in 2020. Click to read and learn more about these independent, determined souls who bucked the constraints of their times to forge ahead fearlessly conserving Texas, each in their own unique way. 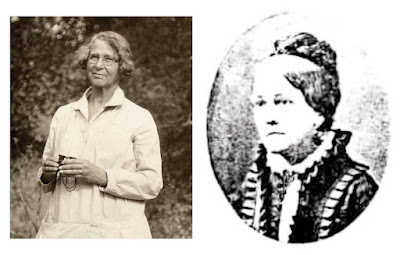 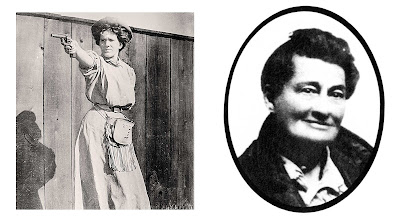 The mother of the Panhandle, Molly Goodnight, and the patron saint of black bears, Bonnie McKinney 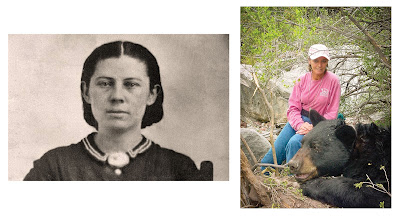 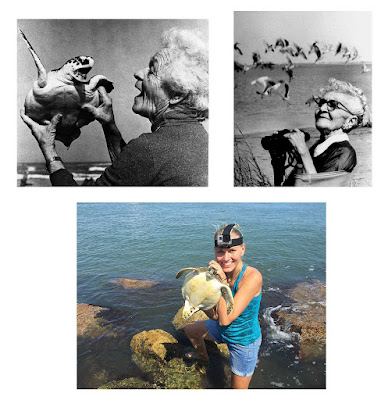 Posted by Texas Parks & Wildlife magazine at 11:26 No comments:

Sneaky or sly are words that often come to mind for a fox because of famous characters such as Roald Dahl’s Mr. Fox or Reynard from the children’s animal tale. However, these crafty critters are much more fantastic than we make them out to be. 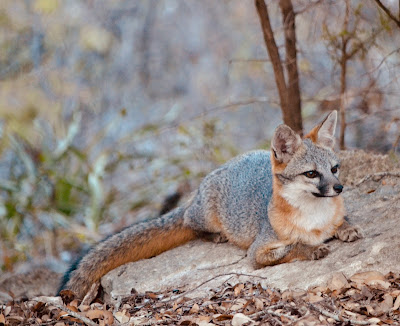 Texas has four species of fox — the red, gray, kit and swift fox. Red foxes are not native to Texas but were imported from England for sport and training for foxhounds. They are the largest foxes in Texas and are found in woodland areas of eastern and central Texas. People often misidentify red foxes and gray foxes because of their similar appearances. However, gray foxes have a shorter and more muscular build. Gray foxes are the most common fox in Texas and are found statewide. They are one of the few members of the canine family that can climb trees.

Likewise, kit and swift foxes share similar appearances and were even previously believed to be the same species. However, most scientists now believe they are separate but still closely related. The kit fox is the smallest fox in America and is found in West Texas deserts, while the swift fox occurs only in the Panhandle.

Though foxes are closely related to dogs, they share many behaviors with cats — their stalking hunting style, their sensitive whiskers and their use of the tail for balance. 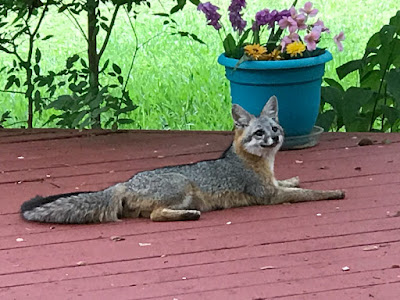 Foxes are fascinating mammals (they can make 20 to 40 sounds to communicate), but they get a bad reputation because many people see them as a threat. Foxes aren’t dangerous to humans unless they have rabies, which is rare, or are captured or handled. They mostly resort to fleeing the situation rather than fighting. Rabies in foxes has been largely eliminated in Texas thanks to a Texas Department of State Health Services program that aerially distributes an oral rabies vaccine in pellet form that’s eaten by foxes.

Many people fear foxes will eat pets, which are not the first prey on their minds. Foxes mainly dine on rodents, rabbits and other small animals, along with the occasional chicken. People also think that foxes kill for fun, which arises from their style of surplus killing. Given the opportunity, foxes may kill surplus food and store or bury their excess dinner for later. Foxes are trying to survive in the same way any other animal would. 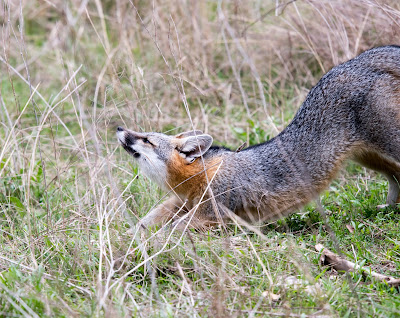 If you start to recognize foxes for their intelligence and beauty, you can see they are quite fantastic after all.

Posted by Texas Parks & Wildlife magazine at 11:48 No comments: