Probably the most ubiquitous of our larger mammals, this masked bandit is a mainstay of suburban backyard as well as urban downtowns. In this week's Mammal Monday our Editorial Intern, Landry Allred, extols the virtues of our native outlaw. 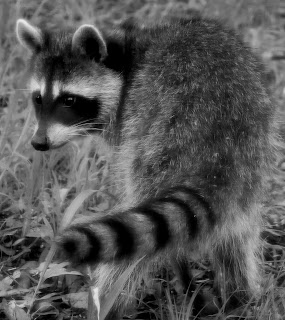 These furry bandits are known for their black fur around their eyes resembling a robber’s mask. However, raccoons are much more fascinating than we make them out to be.

Raccoons are highly adaptable and can live in wooded areas near waterways, as well as urban spaces. They are common throughout Texas with about 22 subspecies in the world. Despite the common idea that they are similar to rodents, they are actually more closely related to bears.

The word “raccoon” originated from the Algonquian Indian word arakun (arakunem), meaning “he scratches with his hands.” In the 1700s, American settlers dropped the first vowel and the name “raccoon” was born.

Seen as curious critters, they are quite intelligent and adaptable.

When near water, raccoons appear to be washing their hands and washing food for consumption. This is a common misconception; they are actually moistening their hands and food to heighten their sense of touch. Raccoons are very tactile animals and have dexterous hands, making them agile climbers and strong swimmers. When they douse their hands and food in water, it enhances their touch receptors and their understanding of what they’re about to consume. They couldn’t care less about hygiene.

Another myth surrounding raccoons is that they are only nocturnal. While they are more active at night, and have excellent night vision to aid them, they can and will make daytime appearances if need be. 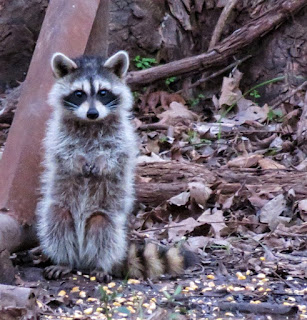 Raccoons may appear dangerous when they bare their teeth, but raccoons will mainly attack only if they feel threatened. Raccoons are known to carry bacteria and diseases such as rabies, which makes humans wary of them. While they are at higher risk for rabies than many other mammals, there has only been one documented case in the U.S. where someone has died from a raccoon with rabies.

These bandits can actually be fairly helpful, as they help with soil turnover, pollination and cleaning garbage and dead animals off of the streets. However, many people will still not want these visitors at their homes, so it is a best practice to clean up after feeding your pets outside and keep your garbage secure to prevent raccoons.