They mean death for tarantulas and can painfully sting us 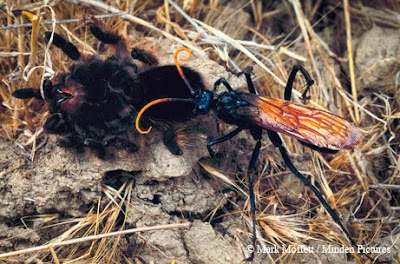 One of the most conspicuous of Texas’ invertebrates, tarantula-hawk wasps (genus Pepsis) are also one of our most fascinating. These big wasps could certainly be described as beautiful with their iridescent, blue-black bodies and their wings and antennae that can be metallic black, orange or red. What’s most interesting about these wasps, however, is their namesake behavior: hunting tarantulas.

I admire any hunter that specializes in prey larger than itself, particularly if that prey has the substantial defensive weaponry of a tarantula. But the tarantula-hawk wasp takes on the challenge without fear, not only hunting tarantulas at the ground level but also being so bold as to enter occupied tarantula burrows, forcing the spider to the surface for an attack.

If you are lucky enough to see the battle, settle in and take advantage of a rarely seen show.

Then the tarantula’s day gets even worse. The immobilized but still-alive tarantula is carried back to a burrow, where the tarantula-hawk wasp lays a single egg. Like a tomb, the burrow is then sealed until the egg hatches, and the wasp larva begins to feast on the living tarantula. Although chances for survival are slim, all hope is not lost for the tarantula. In at least one species, if the wasp egg does not hatch, the venom will eventually wear off, allowing the tarantula to make a full recovery.

Aside from their behavior toward tarantulas, adult tarantula-hawk wasps are, for the most part, docile vegetarians, feeding primarily on nectar. About 13 of the 250-plus species of tarantula-hawk wasps occur in Texas. Body lengths typically measure up to 2 inches, though the largest of the South American species can reach lengths up to 2½ inches.

They are easily observed up close, being active during the day, particularly morning and evenings, when females can be found engaged in a fast-paced search for prey, apparently unthreatened and unafraid of humans or any other would-be predator.

Justin Schmidt from the University of Arizona hypothesizes that this confidence has arisen from the female tarantula-hawk wasp’s spectacular ability to inflict pain. Schmidt is well qualified to make this claim: As creator of the Schmidt sting pain index, he has been stung by more species of pain-inducing invertebrates from around the world than most of us care to think about. On the Schmidt sting pain index, tarantula-hawk wasps hold an infamous distinction as one of only three insects to attain the highest possible rating of 4 or “traumatically painful.”

For perspective, the rather aggressive red wasps (Polistes carolina and Polistes exclamans) that are common throughout much of Texas get a 2, merely “painful.”

Schmidt has described the pain of the tarantula-hawk wasp as “immediate, intense, excruciating, and totally debilitating. The pain is so debilitating and excruciating that few, if any, can maintain normal coordination or cognitive control” if stung.

Despite the sobering warning, humans have little to fear from tarantula-hawk wasps. They don’t show unprovoked aggression toward humans, and in the unfortunate event of a sting, the pain completely subsides after a few minutes, leaving no permanent damage.

Their bold coloration and charismatic swagger make tarantula-hawk wasps an entertaining and welcome addition to the Texas landscape. 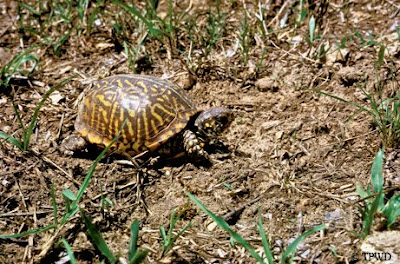 On a recent walk in the woods, our family dog returned from his travels with a “treasure” gripped firmly in his jaws. He ran straight to me, obediently dropped his package at my feet and proudly looked up awaiting his reward — a heartfelt “good boy!” Upon closer inspection, I noticed that this gift was a little different from his customary offerings. I reached down and picked up a slobbery, slimy and somewhat disoriented three-toed box turtle.

Just mention the name “box turtle” and it brings about a flood of fond childhood memories for most Texans. I doubt that there is any other type of turtle in our state so warmly welcomed by the masses, so loved that it could possibly compete with the beloved Texas horned lizard in a reptile popularity contest. Box turtles were once common throughout the state, but recent population declines have been a cause for concern.

Box turtles can be found statewide, with each subspecies generally occupying a different area of the state. The desert box turtle inhabits the southwest, the three-toed box turtle resides in the eastern portion of our state, and the ornate box turtle generally enjoys a more statewide distribution. Box turtles are omnivorous, with a diet of insects, snails, slugs, fruits, berries, plants and sometimes carrion.

These unique turtles acquired their name from the hinge on their shell that allows them to completely shut the shell when threatened. This adaptation protects the turtle from its natural enemies, which are not thought to be the most likely culprits in recent population declines. Habitat loss and collection for the pet trade are the more likely reasons for the decline.

These turtles occupy a very small home range, which means that when they are removed from an area for any reason, they generally do not recolonize that area. They are also long-lived, having been documented with a lifespan of up to 50 years. Because of this long life expectancy, they take between five and 10 years to reach maturity, and produce relatively few offspring. These biological constraints add to the already daunting task of rebounding from population and habitat losses.

To enable us to better manage their populations and to gain more information about these turtles, TPWD tracks box turtle sightings. You can help by completing the form at www.tpwd.state.tx.us/boxturtles if you happen to encounter a box turtle. We hope these efforts will allow for future generations to look back at their fond childhood memories of these interesting “treasures.”

Tiny monsters lurk in the shallows off the Texas Coast 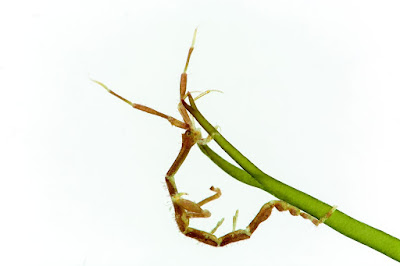 Ever find yourself jumping in  your seat when a fascinating yet horrible monster pops out on the movie screen? Even though you cover your eyes, you still venture a peek between fingers to get another glimpse.

Real animals often serve as models for some of Hollywood’s scariest inventions. It wouldn’t be surprising if a certain type of amphipod — small crustaceans found along the Texas coast — inspired man-eating aliens in a series of blockbusters. Even its name is scary: skeleton shrimp.

Skeleton shrimp, a small, unusual group of amphipods, are not really shrimp at all. Shrimp have 10 pairs of legs, but most amphipods have only seven (certain skeleton shrimp have as few as five). With a long, stick-like body and large claw-like appendages (gnathopods), skeleton shrimp look like the translucent offspring of an aquatic praying mantis and a walking stick.

If you want to search Texas beaches for these living monsters, bring a magnifying glass. Of the nine species of skeleton shrimp recorded from Texas coastal waters, the largest are only about one inch long; the smallest, less than a quarter-inch long.

Aside from their small size, skeleton shrimp are masters of disguise. They use their hind legs to grasp onto their favorite substrate, and then allow their bodies, antennae and remaining appendages to wave in the water, blending in like a small piece of algae. They can be found attached to a variety of surfaces, including mangrove roots, eel grass, floating debris and the sargassum that washes up on beaches.

Depending on the species, skeleton shrimp feed on a variety of material, including detritus (a mixture of living and dead plant and algal material and microorganisms), plants, algae and small animals, including other skeleton shrimp. Despite their terrifying close-ups, they are much too small to pose any threat to people.

When piles of sargassum make fishing on the beach difficult, put down your pole and collect a small bucket of the stuff. Look closely and find the eerie world of skeleton shrimp, perched like their bony namesakes in a forest neighborhood of odd residents.

Pull out your magnifying glass or zoom your camera in for a closer look at what might be the next Hollywood monster. 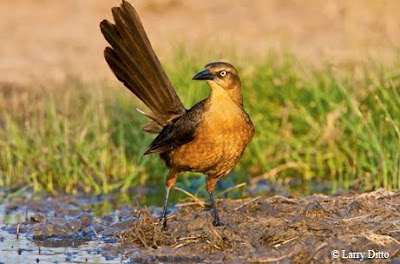 ﻿﻿﻿﻿If you’ve ever dined on an outdoor restaurant patio in Austin, you’ll remember the laser gun vocalizations and bold presence of the great-tailed grackle. You can’t leave your plate unattended for even a moment without the streetwise thief snatching a morsel.

This noisy, gregarious bird has not been deeply rooted in much of the Lone Star State for long. Some early writings on Texas avifauna (including J.K. Strecker Jr.’s 1912 checklist The Birds of Texas) found the great-tailed grackle only in South Texas, from San Antonio to Corpus Christi and south to the Rio Grande Valley.

Another barometer of Texas birds, H.C. Oberholser’s 1974 book Bird Life of Texas, claims the grackle did not arrive in Fort Worth until 1944 (and in Dallas until 1947). The explosion northward throughout Texas (and beyond) caught steam after World War II when Texans flocked from rural areas to the cities. These now-urban birds are as ubiquitous in cities as pigeons, rats and roaches.

There really is safety in numbers, which is one reason for the success in this species. During breeding season, males carefully guard harems of females with their young, reacting viciously toward perceived predators. Near the nest colony, grackles overwhelm visitors with numbers and noise.

The colonies can be large and are considered a nuisance by many. Anyone who parks a vehicle under a shady tree full of these nesting or sleeping birds soon regrets the decision because the droppings are not easy to scrub off.

Slender and long, male great-tailed grackles are iridescent black with a long shovel-scooped tail; females are smaller in drabber shades of brown and black. The voice of the displaying males is elaborate, with a variety of sounds, some sounding like a laser gun in a movie.

These city birds forage in open areas such as parking lots, in search of scraps from cars or garbage cans, and they forage lawns for anything that crawls. They sometimes even follow behind a lawnmower.

At one time, this species and its close relative, the boat-tailed grackle, a resident of coastal marshes straddling the Gulf Coast, were considered one species. Both are glossy black and noisy and congregate in sizeable flocks. There are slight differences, however, which have resulted in the split into two species.

While you won’t find the boat-tailed grackle very far from coastal marshes with brackish water, the great-tailed grackle has a far greater range, one that continues to expand northward with the aid of the growing (human) urban population. 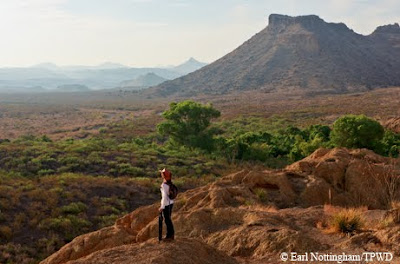 Big Bend Ranch State Park is celebrating its 10th anniversary with a free fiesta Nov. 3 at the Sauceda Ranger Station located in the middle of the park.

“Big Bend Ranch State Park offers a unique wilderness experience within the state parks system tied with spectacular night skies and scenery,” says Mark Lockwood, Regional Director for Texas State Parks. “The expansion of access within the park that started 10 years ago has introduced this rugged park of Texas to a generation of outdoor enthusiasts.”

The event begins at 10 a.m. and runs until 5 p.m. Walt Dabney, former director of Texas State Parks, career ranger and past national chief ranger for the National Park Service will give the keynote presentation and speak about the history of public lands, public lands in Texas and the BBRSP acquisition.

The fiesta includes activities such as guided hikes and bike rides, horseback rides, jeep tours, birding activities, a variety of vendors and entertainment, and barbecue. There will also be geology, archeology and birding tours throughout the day.