﻿﻿Roadrunners rely on swiftness and agility, not flight.


“Beep-beep!” For many of us, this silly sound pops into our minds when we think of roadrunners. You know, Wile E. Coyote’s cartoon nemesis, the road-racing bird that was always one step ahead.

Today, we also relate lightning-fast Internet connectivity with the name. Either way, this zippy bird is indisputably affiliated with speed.

The greater roadrunner (Geococcyx californianus) is a ground-dwelling member of the cuckoo family (Cuculidae). A large bird, reaching a total length of 24 inches, it is the only roadrunner found in the United States. 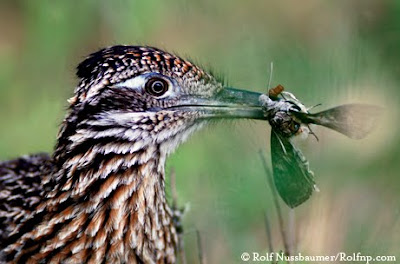 And, actually, “Beep-beep!” is not even close to the dove-like coos and clicking vocalizations roadrunners make.

Often thought of as an iconic species of the desert Southwest, the greater roadrunner can be found throughout Texas, even behind the pine curtain of the easternmost regions of the state. Roadrunners are aptly named for their ability to run and walk.

Speed is their greatest asset, and they are capable of running as fast as 17 mph. While these birds are quite capable of flying, they rarely do unless threatened. Even then, roadrunners will fly only short distances, and usually hit the ground running.

The roadrunner’s diet is as diverse as the habitats where it can be found. Well-known as rattlesnake hunters, they consume mainly other animals: insects, lizards, snakes, rodents and other birds.

Roadrunners are exceptionally agile and can catch birds right out of the air. Their long tail provides a valuable counterbalance when involved in high-speed pursuit of prey.

Armed with speed, agility, power and a sharp beak, roadrunners usually have no problem getting something to eat. If necessary, they will subdue their quarry by repeatedly slamming it onto the ground.

Roadrunners prefer to eat on the run, and are often seen with a snake or lizard hanging from their mouths. Greater roadrunners live from seven to 10 years, reaching maturity after two years.

Monogamous, they breed once or twice annually. Males exhibit some interesting courtship rituals.

The male will often entice a potential mate with a tasty morsel while performing a tantalizing dance, keeping the food just out of her reach. While she’s distracted by the prize, he takes the opportunity to breed. He then relinquishes the bait, and through this innocent chicanery, a lifelong pair bond is formed. Such ingenuity!