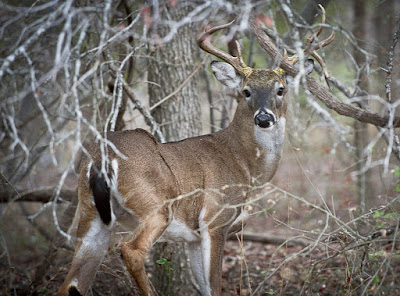 Deer hunters hoping for a change in the weather may be in luck for opening weekend of general deer season as weather forecasters predict cooler temperatures across the state. With an estimated 5.3 million deer in the statewide white-tailed deer population, Texas hunters heading to the field this fall are sure to fill their freezers with this season’s bounty.

“Good fawn production this year should help maintain the overall population and provide an abundance of deer for hunters to pursue,” said Alan Cain, Texas Parks and Wildlife Department’s white-tailed deer program leader. “We’ve seen a slow but steady growth in the statewide population over the last 15 years, particularly in areas such as the Hill Country, Oak Prairies and portions of the Cross Timbers. As a result of the growing population, we’ve expanded hunting season opportunities in the last several years, including a couple of changes to the antlerless season in 2019.”

For the first time, 21 counties in south-central Texas can partake in a four-day antlerless season that runs from Nov. 28- Dec. 1.

Any antlerless deer harvested during the archery, youth-only, muzzleloader, and the 4 doe-days during the general season is required to be reported to the department within 24 hours of harvest using either the “My Texas Hunt Harvest” mobile app (for iOS and Android) or on TPWD’s My Texas Hunt Harvest web page.

The change in weather may be what is needed to jump start deer movement which has been slow during archery season due to unseasonably warm temperatures.  As hunting conditions improve with cooler temperatures, hunters can expect an above average year in terms of antler quality, deer numbers and overall harvest.

“Despite a slow start to archery and MLDP (Managed Lands Deer Program) season, I’m hearing of some exceptional bucks being harvested including an incredible 214 gross Boone and Crockett score low-fenced buck from La Salle County,” said Cain. “I’ve talked to a number of hunters and landowners who have been scouting at their lease or hunting property for the upcoming general season and are reporting good antler quality as well. I think hunter excitement is high this season and hunters have lots to look forward to.”

The general gun season opener kicks off on Nov. 2 and runs through Jan. 5, 2020 in north Texas and Jan. 19, 2020 in south Texas. A late youth-only season is also slated for Jan. 6-19, 2020. For additional late season deer hunting opportunities and county specific regulations, consult the 2019-2020 Outdoor Annual of hunting and fishing regulations.

Hunters are also reminded to review the TPWD chronic wasting disease regulations for information about CWD testing requirements and carcass movement restrictions for the 2019-2020 season. Also as a reminder, Texas hunters harvesting deer, elk, moose or other susceptible species in other CWD-positive states must also comply with carcass movement restrictions when bringing those harvested animals back into Texas.  Additionally, the Texas Animal Health Commission has mandatory testing requirements that apply to elk, red deer, sika, moose and reindeer.