If you see one baby there's bound to be more. In this week's Mammal Monday our Editorial Intern, Landry Allred, gives us some insight into an often misunderstood Texas habitue. 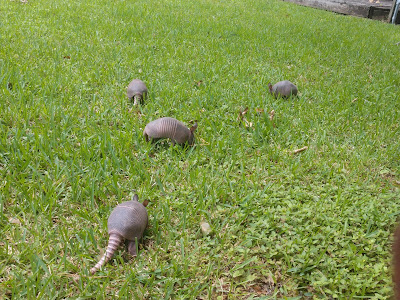 When you think of Texas, do you see a scaly critter with a shell for an outfit?

The armadillo is an official state animal of Texas, designated in 1927. There are 20 armadillo species in the world (mostly in Latin America) but only one species in the United States. The nine-banded armadillo can be found throughout Texas, except in the western Trans-Pecos area.

Its name is Spanish for “little armored one,” which serves true, as it is the only living mammal that sports such a shell. Armadillos are closely related to anteaters and sloths, and they love to dig in the dirt for insects to munch on.

While they have poor eyesight, they have a keen sense of smell and also use hairs on their belly to sense the surrounding area. Armadillos are great swimmers, and they can hold their breath for up to six minutes or inflate their stomachs to buoyantly swim across a body of water. They can walk underwater to cross streams as well.

Armadillos have a sour reputation because they are known to carry leprosy. They have a slow metabolism leading to a lower body temperature, making them susceptible to the bacteria causing leprosy. However, cases of humans contracting leprosy by handling armadillos are extremely rare. 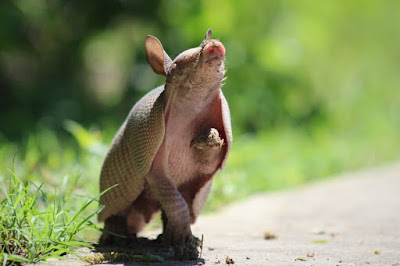 One common misconception about armadillos is that they can roll up in their shell, similar to pillbugs, when frightened. However, only two species can roll up completely, and both are types of three-banded armadillos.

Instead, when frightened, armadillos leap 3 to 4 feet vertically into the air, which is why they are often hit by cars. Though they are small enough for cars to pass over them, they get scared and jump into the car’s undercarriage. This unfortunate yet frequent cause of death is the origin behind their nickname as the “hillbilly speed bump.”

Some people also think of armadillos as “grave diggers,” but that is only because they prefer looser soil, such as that around a gravesite, to hunt for insects. Others think their shell is bulletproof, and while armadillos have been known to survive low-caliber weapons, their shells don’t stand a chance against weapons with high penetration power.

Despite the negative associations people may have with armadillos, they are quite friendly yet cautious animals. Upon being startled, they simply run away and mind their business elsewhere.