Don't let their grimace fool you. In this week's Mammal Monday our Editorial Intern, Landry Allred, tells how those sharp teeth are some of the most beneficial to visit your yard. 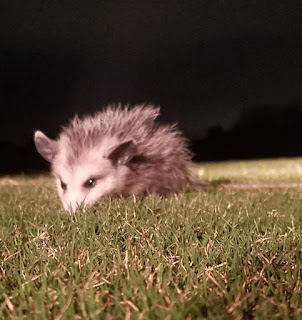 We see them at night, waddling along the roadside seeking their next meal. We see their glowing eyes when we shine a flashlight on them to discover the true identity of the moving shadow. We point them out to our friends when we’re out for an evening stroll.

These opossums are the creatures of the night, and their beady eyes and rat-like tails mean they won’t win any cuteness contests. However, these mammals are actually extremely helpful and quite misunderstood.

Opossums are the only marsupial native to the U.S. and are closely related to kangaroos and koala bears. Texas has only one opossum species — the Virginia opossum. They are commonly found throughout Texas, except in the Trans-Pecos and Llano Estacado of the Panhandle. In urban areas, you can usually find opossums roaming the streets at night alone.

They have a flexible tail that can be used as a fifth hand. Some people have reported seeing them gather grass and material with it. They are the only mammal aside from primates that have opposable thumbs.

Many people believe opossums are destructive, imagining that they dig up soil and destroy property. However, they are quite helpful to landowners, as they eat pests such as ticks, cockroaches, rodents, snakes and even dead animals. Think of it like a natural clean-up crew or an outdoor housekeeper! 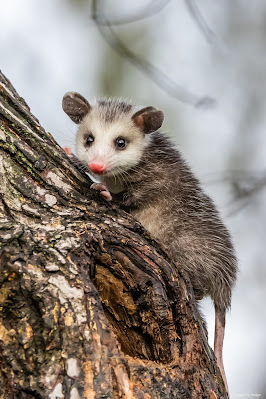 Despite having 50 sharp teeth, which is more than any other mammal in North America, they are quite peaceful (but will sometimes hiss when in danger). Typically, if they feel threatened, they “play dead” and lie down with their eyes closed or open, staring into space. Playing dead is an involuntary response, and they will remain unconscious for some time until the threat is gone. They might even give off a dead animal smell, or foam at the mouth.

One of the most popular myths of opossums is that they carry diseases. In fact, they carry fewer diseases than dogs and cats because their low body temperature doesn’t allow infections to thrive. The rabies virus is very rare in opossums.

Despite the bad reputation opossums have, they are fascinating animals, as they are some of the oldest and most primitive animals of the New World. Scientists have referred to them as “living fossils” because they’ve remained relatively unchanged for at least 50 million years.

So next time you see an opossum, take a moment to remember that they’ve been around for a long time and all the good they’ve done in the world.