On one side, visitors can experience a savanna with Texas persimmon and Ashe juniper trees scattered among the open grassland or even catch a glimpse of a black-bellied whistling duck waddling along the wetlands. On the other side, northern mockingbirds refresh themselves at a rock watering structure, and butterflies flutter among the milkweeds.

But what if these two environments were connected?

Since its opening in 2010, Phil Hardberger Park in San Antonio has provided a refuge for those seeking an outdoor haven. However, this 330-acre park is divided by the Wurzbach Parkway, inhibiting visitors and animals from easily accessing the park’s west and east sides. A land bridge is under construction and will connect the two sides by fall 2020.

Before it was a park, the land was Max and Minnie Voelcker’s dairy farm. When the couple passed away and the land went up for sale, it became the perfect opportunity for Phil Hardberger — who had recently started his second term as San Antonio’s mayor — to create more city green space. Hardberger led the effort to purchase the land, knowing the inevitability of the park’s division as Wurzbach Parkway was being constructed.

“I’m happy we bought it when we did because if we hadn’t, that land would have been filled with houses and developments,” Hardberger said. “From that day until now, I have never seen any other land come on the market that was perfect for a park. We’d probably still be waiting.”

A land bridge was always part of the park’s plan to connect the sides, but its execution was impossible until the city finished building either side of the park and raised funds. The project is currently underway, and will allow pedestrians and wildlife to walk across a nature-immersed bridge, avoiding traffic below. Building a bridge allows cohesiveness between the natural areas and greater wildlife protection. The vegetated bridge will be 150 feet wide so both people and animals can naturally cross, and will add more than an acre of parkland.

The park’s division makes it difficult for wildlife survival because animals can either get hit by oncoming traffic or fail to cross out of fear or intimidation, said Laura Zebehazy, program leader for wildlife habitat assessment at the Texas Parks and Wildlife Department. Zebehazy, who has worked on past highway projects concerning the road impact on wildlife, said roadways can affect multiple animal populations. 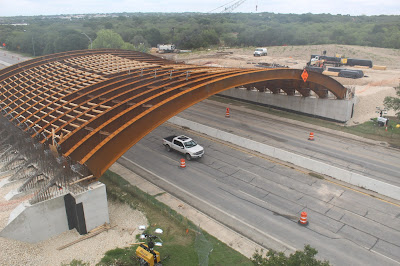 “We’re not allowing genetic flow to happen naturally, so it causes isolation of whole populations or parts of it,” Zebehazy said. “Males could be on one side of the road and females on the other, and if they’re not willing to cross, you have that sort of impact.”

While there’s not a one-size-fits-all solution, Zebehazy said there are measures to take when considering linear infrastructure. The best approach to ensure wildlife protection is to plan appropriately and intelligently. The Hardberger land bridge will act as an extension of the already existing park area. As the visitors and animals stroll along the path, they will feel as if they’re climbing over a hill and forget about the rushing cars below their feet.

Denise Gross, the park’s executive director, said based on results of other land bridges, animals adapt quickly to the bridges. Looking at wildlife travel patterns, Gross expects the animals to mainly use the bridge when people are absent.

The 10-year project will cost $23 million, pulling from the Hardberger Park Conservancy’s raised donations and grants along with funds from a 2017 city bond. Expected features will include a rainwater system to irrigate the bridge and park, a disability-accessible walking trail and newly planted trees and grasses.

Hardberger said this project came at an appropriate time, not only for construction and economic health purposes but also for the community’s well-being.

“It’s the perfect antidote to what’s been happening, which is a lot of sick people and people out of a job,” Hardberger said. “It’s a triumph over adversity — something beautiful and spectacular out of the ashes."
To learn more about conservation efforts in Texas, subscribe to Texas Parks & Wildlife magazine.  For a limited time enjoy three months of digital access to 600+ articles and our expanded 2020 Summer issue - all for only $1.99!
Posted by Texas Parks & Wildlife magazine at 10:00