"It will be remembered that it was in southeastern Texas, in all probability within 50 miles of the present city of Houston, that the earliest discovery of the American bison on its native heath was made in 1530 by Cabeza de Vaca … They were also found in immense herds on the coast of Texas, at the Bay of St. Bernard (Matagorda Bay), and on the lower part of the Colorado (Rio Grande, according to some authorities), by La Salle, in 1685, and thence northwards across the Colorado, Brazos, and Trinity Rivers. They afterwards landed in St. Louis Bay (now called Matagorda Bay), where they found buffaloes in such numbers on the Colorado River that they called it La Rivière aux Boeufs.

It is a curious coincidence that the State of Texas, wherein the earliest discoveries and observations upon the bison were made, should also now furnish a temporary shelter for one of the last remnants of this great herd." 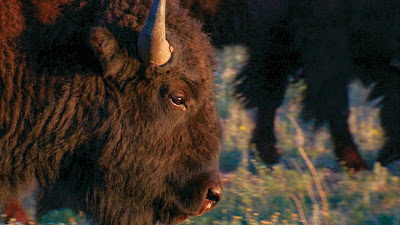 I'll be honest. This post ended up going in a very different direction than originally planned. My intent was to highlight the bison, particularly as this past Saturday was National Bison Day. But then, as I was doing a bit of research, I stumbled across Mr. Hornaday's report. And it is a fascinating piece of American history that's intrinsically tied to Texas. So Mammal Monday went a little sideways. It's still about the bison, but more about why we still have them than the bison itself.

Every American knows the story of the buffalo, an animal so plentiful that vast herds covered the landscape from Alaska into Mexico, 60-million strong. But by the time Mr. Hornaday's report was published in 1889, he could only confirm that roughly 635 wild bison remained alive on the continent — 85 of those in the U.S.

The report itself is rather breathtaking in its scope. It is a celebration of the animal, a mourning of its systemic slaughter, and a plea for "preservation of the species from absolute extinction."  In his preface, Mr. Hornaday writes, "The wild buffalo is practically gone forever, and in a few more years, when the whitened bones of the last bleaching skeleton shall have been picked up and shipped East for commercial uses, nothing will remain of him save his old, well-worn trails along the water-courses, a few museum specimens, and regret for his fate."

Thankfully his report was something of a wake-up call. Today it is considered one of the first important treatises of the American wildlife conservation movement.

According to the report, there were bison "running wild and unprotected" in Texas on January 1, 1889. About that small herd he notes that a "miserable remnant" of the great southern herd could be found in the Panhandle along the Canadian River. It numbered about 100 individuals in 1887, but over the course of two years a local rancher, identified as C.J. Jones, had killed 52 and captured 18. Jones and the men in his hunting party "saw about all the buffaloes now living in the Panhandle country, and it therefore seems quite certain that not over twenty-five individuals remain. These are so few, so remote, and so difficult to reach, it is to be hoped no one will consider them worth going after, and that they will be left to take care of themselves."

On page 458 of the report, Mr. Hornaday begins listing every bison herd and individual bison in captivity on January 1, 1889. Every single non-wild bison in the United States, Canada and Mexico appears on the report, along with their sex, provenance and value if purchased or sold!  He notes that an I.P. Butler of Colorado, Texas, owns a young bull buffalo and a half-breed calf. At the top of page 461 we find the following:

"Herd of Mr. Charles Goodnight. Clarendon, Texas. — Mr. Goodnight writes that he has been breeding buffalos in a small way for the past ten years, but without giving any particular attention to it." At present his herd consists of thirteen head, of which two are three-year old bulls and four are calves. There are seven cows of all ages, one of which is a half-breed."

It's been over a century since conservation efforts by men like William Hornaday and Charles Goodnight ensured that the bison would survive. Today the Official Texas State Bison Herd, descended from the Goodnight herd, with unique genetics of the great southern herd not shared by any other bison in North America, is a living testament to those efforts. 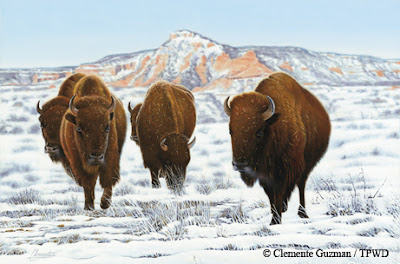