I heard them before I ever realized I was looking at them. 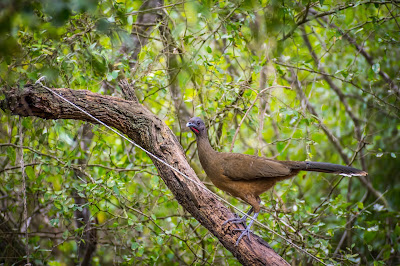 © Cheri Alguire | Dreamstime
Strident is certainly one way to describe the call of the plain chachalaca. A sort of low register clucking, somewhat like that of a chicken but in the range of a turkey, curling up into a shrill cry. It's hard to describe but distinctive and impossible to ignore.
I was gazing across the bed of a dry resaca at Santa Ana National Wildlife Refuge trying desperately to pinpoint what was making that sound. It took me several minutes to realize that a handful of large birds had emerged from the brush and were picking their way gingerly towards the blind where I sat.
They were agile and fleet despite their rather unwieldly looks; long necks, tail feathers and legs seemed to balance like teeter-totters across their rounded bodies. Their movements were familiar enough to evoke a comparison to chickens, and there was something about their neck and head that was certainly akin to a turkey. But it was obviously not a bird I'd seen before. 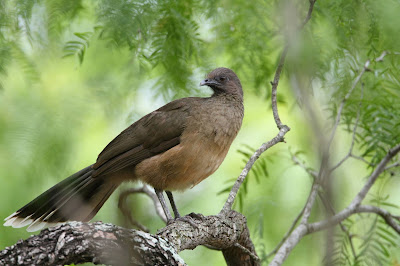 © 19838623doug | Dreamstime
Nonetheless, the plain chachalaca is a common sight in the Rio Grande Valley. It's the northernmost member of the bird family Cracidae, which can be found throughout Latin America.  None of the Cracidae are particularly ornate and the chachalaca is no exception. Its plumage is best described as, well, plain.  Somewhat dun colored, the chachalaca sports feathers in a range of brown, olive and beige, and is roughly the size of a roadrunner.
Apparently the chachalaca is considered difficult to find during the course of the day — but if you hear that call you know they're somewhere close by.
Posted by Texas Parks & Wildlife magazine at 16:23