Did Texas Fish Weather the Snowmageddon? 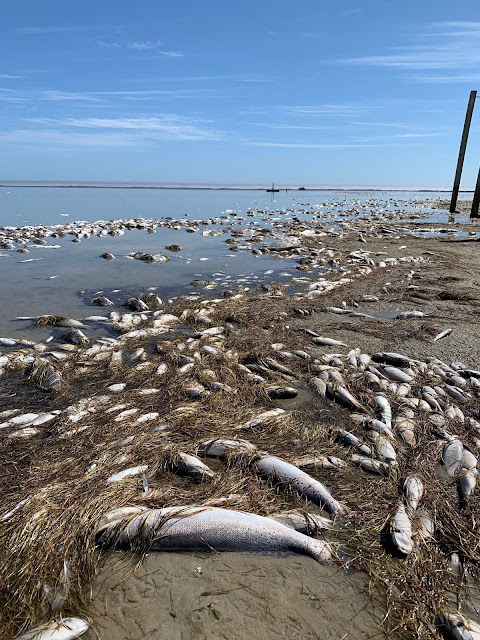 February’s massive winter storm impacted not only the millions of Texans who lost power and water — long periods of frigid temperatures caused problems for the state’s fish population as well.

Texas Parks and Wildlife Department biologists are assessing fish kills, a process that can take some time in a huge state with a lot of coastline, but they’ve released some preliminary observations of the trends they’re seeing. As they amass more information, they’ll know more about the extent of the mortality. It’s a bit like putting together the crime scene to solve the mystery.

You can help them! TPWD is asking for the public’s help in reporting any animal mortality events they observe on their property, ranches or in their neighborhoods through a special project on the iNaturalist website or app. It’s easy to download your photo or enter a quick bit of information on what you saw and where. That’s all you have to do!

Fortunately, the winter storm’s impacts to inland freshwater fisheries have likely been minimal, especially when compared to observations along the coast. There have been a few reports of threadfin shad kills in North Texas as well as non-native tilapia kills in the far southern region of the state, but no impacts to freshwater sport fishes have been documented. Rainbow trout stockings planned for that week of arctic weather were postponed to wait for improved travel conditions for delivery.

Freezing events along the Texas Coast are rare, but extreme cold temperatures can be a natural cause of fish kills. If fish do not make it to refuge in deeper, more temperature stable water in cold weather, they may die when water temperatures reach a certain threshold. For example, spotted seatrout experience more mortalities associated with freezing weather than other common game species.

The geographic extent of fish kills includes the entire Texas coast, but bay systems south of Galveston Bay have seen the biggest impacts. The majority of the kills were located along the southern shores and undeveloped areas, such as the back sides of the barrier islands. Affected recreational fish include spotted seatrout, red drum, black drum, sheepshead, grey snapper, snook and tarpon.

Coastal Fisheries biologists will continue to make on water assessments into the week of Feb. 22-26.  While ongoing assessments can provide some estimates of the magnitude of this event, biologists will be able to present a more accurate assessment of the impacts on particular species as routine monitoring (gill nets, bay trawls, and bag seines) continues and they are able to benchmark numbers against sampling efforts from previous years.

For many of the key game species, informative data will start coming in with spring gill net sampling which runs from mid-April thru June. Additionally, as a part of year-round survey efforts, biologist will soon begin collecting information from recreational anglers at boat ramps.

This data will provide additional information regarding the impacts of this cold-weather event and will help inform what management actions, if any, are needed to help accelerate recovery of fish stocks.