Secrets of a big bass hunter

Nowhere in Texas are more ShareLunker bass caught than in Lake Fork. So far 261 Lake Fork fish broke the 13-pound barrier that admits largemouth into the Toyota ShareLunker program. True trophy bass are really rare and catching them requires either sheer dumb luck or a special person using the right techniques.

Today we revisit secrets Richard McCarty shared with the magazine readers previously. As a big-fish hunter with three entries in the program, we can learn some tips from him. 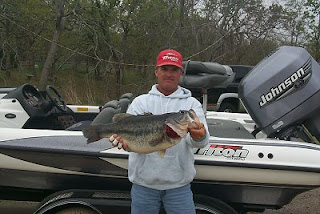 McCarty eases his boat into a sheltered cove among numerous stumps and tree trunks, and smiles. “This place has some big ones,” he says quietly. McCarty stares intently at Lake Fork’s surface before casting a Pop-R topwater lure among the stumps. “There’s a big fish there. I saw it.”

In a cove along the main lakeshore, red-winged blackbirds call for a mate from atop cattails along the bank; just beyond, golf carts purr toward a green on the point of land protecting the cove from south winds. Black-bellied whistling ducks and scissor-tailed flycatchers decorate tree trunks jutting from the water.

Far to the northwest, dark clouds ahead of a cold front emit occasional rumbles of thunder. Hopefully, the lightning keeps its distance, but the clouds and wind-rippled water are welcome. Fish bite better under those conditions, McCarty says.

McCarty switches to a green plastic lizard and begins fishing a spot the size of a bathtub. He bounces the lizard across the bottom by jiggling the rod tip, rapidly moving it up and down a couple of inches. Often fishing no more than 4 feet from the boat, he studies the water, trying to see the fish he knows is there.

It’s a big female on her spawning bed, and she just won’t bite.

After half an hour he shakes his head, picks up the rod with the Pop-R and casts. “I’m amazed at how these things can be so stubborn on a day like today,” he says. “They should be biting. If I could draw a day to catch a big bass, today would be the day. And I haven’t had a single roll.”

McCarty makes a third cast, and suddenly lightning strikes — fish lightning. The lure disappears in a boil of water, and the rod instantly horseshoes. “It’s a big one,” McCarty says. Moments later the scale proves he knows his fish: It weighs in at a fraction more than 9 pounds.

Most people would be thrilled to catch a 9-pound bass, but in McCarty’s world, it’s a dink.

McCarty slips the bass gently back into the lake and takes a moment to explain what just happened, and why. “The water is about 4 feet deep here, and you can see the fish on occasion,” McCarty says. “I saw a lot of these fish several days ago, so I know about where they are.” The fish are where they are due to an ancient imperative: the urge to spawn. “In spring the shallow water warms up, and the fish seek it out,” McCarty continues. “They have to get into warm water so the eggs they are carrying will mature enough to spawn. As they migrate to the shallows, they get into a zone where we can catch them.”

Class continues. “In early morning I throw a topwater bait,” McCarty lectures. “I keep a rod rigged with a plastic lizard close at hand in case a big fish blows up on the topwater. Lots of times a bass will slam a moving bait out of anger and show itself, but it’s not aggressive enough to eat it. I go right back in there with a lizard, and 30 to 40 percent of the time, I’ll catch that fish.”

McCarty switches to an orange-highlighted jerkbait, a Bomber Long A, and continues to work the cattails near the bank. “Fish will bed in 3 to 4 feet of water commonly, and as deep as 6 feet, but it’s rare a fish will come out of 6-foot water on this lake and bust a topwater,” McCarty says. “I’m trying to get one to come out of that shallower water. There are a lot more fish in here than what I’m catching.”

As if to prove his words, two 5-pound males take his lure off the same bed. A larger female follows the lure but won’t bite. McCarty kicks it up a notch and ties on his best big bass bait, a Zoom Super Salt Plus 8-inch magnum lizard in watermelon candy color. He keeps dropping the bait in front of her nose for half an hour before he gives up. “If I get one bite every hour doing this, I’m more than satisfied, because I know the fish will be a big one,” he explains.

Thunder rolls across the lake, and we head for the ramp.

Two days later we’re back on the lake. A three-quarter moon hangs low in a cloudless sky. “It’s going to be a tough day,” McCarty announces. “The good news is it will force me to fish places where if I do get a bite, it will probably be a big fish.”

McCarty points the nose of the boat at the moon and spurs the herd of gasoline-drinking horses to stampede. As the boat leaps onto plane, his hair streams back and he laughs, “I still enjoy the ride.”
Our route takes us up Little Caney Creek, past the spot where Barry St.Clair caught the current state record largemouth bass in 1992, an 18.18-pound brute he called Marie, the middle name of both his wife and daughter. McCarty throttles down and lowers the trolling motor into the water. “We’re coming up on one of the best big fish places I know of,” he says softly. “We need to be quiet in the boat.”

McCarty admits he is a fanatic about noise in the boat. “You need to be really sneaky to catch big fish,” he explains. “You have to avoid not only noise in the boat but also in lure presentation. If you are hanging up on stuff in the water, you’re spooking fish. You have to mentally position fish on the cover and figure out how to get the lure in there without spooking it.”

In contrast to the first day, when he anchored in one spot and threw a lure to the exact same spot 20 or 30 times, McCarty prospects around submerged timber, always on the move. “We had a cold front come through, and we have really high barometric pressure,” he says. “The fish we fished for on Tuesday are not going to bite. Don’t ask me why, they just won’t. So I’ve backed out into 8 to 15 feet of water trying to catch a different group of fish, ones that have not moved up to spawn or have spawned and moved back out of the shallows. A lot of times the fish in this heavier cover will suspend near the top, which makes them hard to catch, but sometimes they will bite if you drop the bait right on top of them.”

A 3-pounder nails the lizard as it falls through a tree, and I wonder if McCarty is clairvoyant. “The lizard is a bulky bait,” McCarty says, as if reading my mind. “It displaces lots of water, and the fish can find it easily. I get a few more bites on lizards than on jigs, and my success rate on boating fish is better on a lizard. A bass will eat anything it wants to eat, and if it comes down on top of him, he bites. I think most of my bites in this kind of fishing are reflex bites.”

When fishing in heavy cover, McCarty puts on a new plastic bait after every bite. “I don’t want to risk a bait being torn and my hook being exposed and hanging up,” McCarty reasons. He also uses 30-pound test line when fishing a lizard. “Big fish will get wrapped around stuff. I expect a big fish on a lizard and am already down in the cover with my lure.”

We work the fencerow up one side and down the other, catching only small males. McCarty believes catching a lot of fish keeps many anglers from succeeding at catching really big fish. “If someone has bass patterned on a spinnerbait and is catching a fish out of a bush every third or fourth cast, they don’t want to leave that. You may have to do something a little different to catch a big bass. So many people pass up the chance at a big bass to keep catching small ones. I’ve gone through areas and not seen anything but small bass, turned the boat around and kept quiet, and seen big bass cruise back to their beds.”

The day ends with one more lesson in bassology. McCarty takes us into a shallow cove with numerous cleared circles of gravel in 3 feet of water. Each is a bass spawning bed, and we are no longer fishing for bass, we’re stalking them.

McCarty peers intently into the water as the trolling motor pulls us slowly among tree trunks. He pitches the lizard, reels it in, and says softly, “She’s caught and doesn’t even know it yet.” On the next cast the rod bows, and a 4-pound bass tailwalks to the boat.

McCarty explains what just happened. “I saw the fish and kept searching to find where its bed was,” he replies. “Once I did and pitched the lure on that spot, she turned on it real fast. When they do that, I know I’ll catch them.”

So what’s the secret of catching big bass? “The difference between guys who catch big bass and guys who don’t is in their proficiencies with individual lures and how many effective casts they make in a day as opposed to just flailing the water,” McCarty says. “The guys who make the most proficient casts in a day will catch more fish.”