Who doesn't love a baby animal — even when it may not be the most welcome in our yard? In this week's Mammal Monday our editorial intern, Landry Allred, explains the why behind that distinctive whiff. 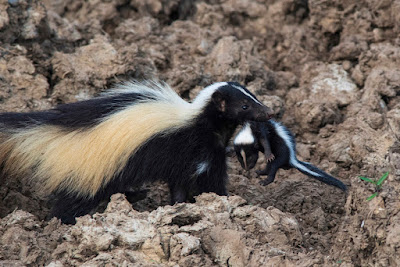 Our smelly companions often get a bad reputation for their secret weapon of odor, but the more you learn about them, the better you’ll be able to coexist with them.

There are 12 species of skunks in the world, and five species occur in Texas. Skunks used to be considered in the same family as weasels, but recently, taxonomists have put them in their own family, along with the Asian stink badger.

Most of the skunks we see are probably striped skunks, found statewide. Their markings can be highly variable. Two other species in Texas are the eastern and western spotted skunk, marked by spots and broken stripes. Many people imagine skunks as black animals with a white stripe running from the top of their head to their tail tip, but this represents only the hog-nosed skunk of the Edwards Plateau and Trans-Pecos region and the rare hooded skunk, which is found only in the Big Bend region.

Skunks and smells always go together. They are known for the foul-smelling odor they dispel from their rear to ward off predators. Most people believe just being near a skunk will cause it to spray, but this is a common misconception. Skunks spray only when feeling threatened as a means of self-defense. 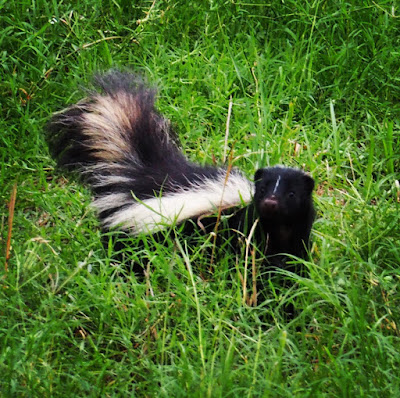 Spraying is often a last resort for a skunk, and skunks will give multiple warnings before spraying, such as stomping their front feet, lifting their tail up and (if it’s a spotted skunk) even doing a handstand. If feeling an immediate danger, however, they will spray without warning.

Another misconception is that skunks spray in a broad area and can do it only once. However, skunks can target shoot in any direction. They can also spray more than once, as each gland they spray from holds a tablespoon of spray. This fluid can be released in controlled amounts, and it takes several days to completely refill.

The spray is a foul-smelling fluid known as n-butyl mercaptan that often causes burning and stinging on a person’s skin. The smell in the area will go away in a few days, and with humans, all it takes is a long, hot shower to rid the odor. However, pets are much more difficult to handle if they are sprayed.

It is a common belief that tomato juice gets rid of the smell. However, the skunk smell will still linger after the tomato juice odor wears off. A mixture of hydrogen peroxide, baking soda and dish detergent will often do the trick.

Another common idea is that holding a skunk by its tail deters it from spraying. While this hasn’t technically been proven, it is unwise to be that close to a skunk. Skunks are also known to be primary carriers of rabies.

Skunks are non-aggressive animals, and the best thing to do to avoid being sprayed is to leave them alone.

Skunks are actually quite beneficial for farmers and gardeners because they eat rodents, insects and other animals that are considered agricultural pests.

So next time you catch a glimpse of our black and white friend, a simple nod will do to let them know you’re not a threat worth spraying.