In my college Texas History course we each had to complete a topographical map of the state. Mine was rather elaborately shaded. I have to admit that I kept it with pride for many years.

The point of the exercise was to place the rivers with accuracy, learn their names and be able to discuss their importance to the people of Texas throughout its history. Of secondary emphasis was the fact that, in downtown Austin, the street names starting from the highway and heading west correlate roughly to the important rivers from east to west. That was less an assignment and more a party trick. Try it with all of your friends!

In the course of the assignment our professor casually said, "And of course the Colorado River is named that because of its color. It's Spanish." What? I, a native Texan born and bred, having previously taken similar classes in fourth and seventh grade, Hispanic myself although by no means fluent in Spanish, was 20 years old the day I learned that Colorado literally means the color red.

I suppose it had simply never dawned on me before. When people talk about the river that passes through the heart of Austin, the river that's the 18th longest in the nation, the river that rises practically in the Panhandle and flows all the way to the Gulf of Mexico — it sure never sounds Spanish. And yet, Spanish it is.

As with many of the geographical features in Texas, and throughout the Southwest, rivers often carry the complicated legacy of the people that came before us. Colorado isn't the only river in the state to bear a Spanish name that we don't pronounce quite on target. Here is a sampling of some of the many other waterways that also pay tribute to our past.

In East Texas the Angelina River flows for 110 miles before emptying into the Neches. The name is an old one, mentioned in written records as early as 1768 and in oral tradition nearly a century before that. It's believed to have been drawn from the Spanish explorers and missionaries who followed earlier generations of conquistadores, to honor a native Hasinai woman who guided and interpreted on their behalf during the 17th century. 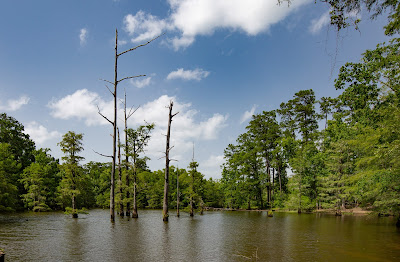 While the Colorado is named for the color of its silt-laden current, the Blanco River is not. This spring-fed river that flows through the heart of the Hill Country owes its name to the gleaming limestone that lines its bed and banks. Blanco, of course, means white. The river was so dubbed by the Aguayo expedition of 1721, but archeological evidence along its route shows that it was inhabited by native peoples long before that. 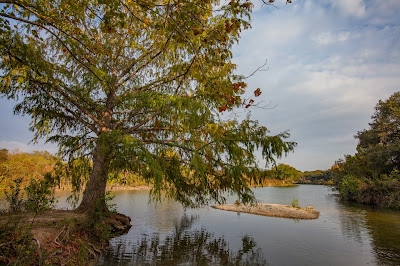 The Bosque River is a curious beast that amply lives up to its name. Translated to something like "woods" or "wooded," the river is composed of four branches — the North, East, Middle and South — that intermingle in turns before eventually feeding into the Brazos. While the name likely derives from the landscape around the river, bestowed on it in 1719 by the Marqués de San Miguel de Aguayo, mapping the branching Bosque is much like drawing a forest of trees. 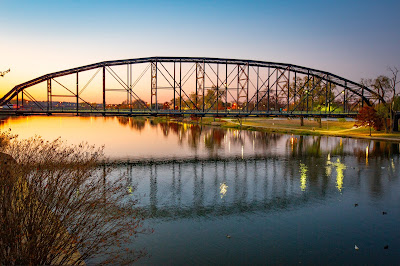 If Texas has a river to rival the mighty Mississippi, then it would have to be the Brazos. Not only is the Brazos River the longest in the state, it has the greatest discharge volume and largest watershed. A portion of its 44,620-square-mile watershed even includes New Mexico. The Brazos is first mentioned in La Salle's exploration narrative but by a Caddoan name, Tokonohono, and expeditions throughout the 18th century certainly confused the Brazos with the Colorado. The entirety of the name is Los Brazos de Dios — "the arms of God" — and there are many legends as to why it's been afforded the name. All of these tales focus on one salient point — people were on the verge of death but found salvation in its waters. Whatever the name's origin, by the end of the Spanish period it was firmly established. 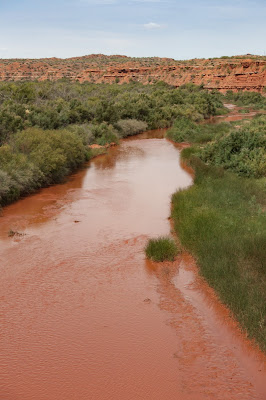 Mid-17th century Spanish explorers discovered a river whose large number of mussel shells produced freshwater pearls. The Concho River was thus named after the conchas (shells) that presaged a wealthy future. Unfortunately, later expeditions found the quality of the pearls to be poor and any possibility of commercial harvest was abandoned. Still, the 246-mile Concho has been home to human habitation for centuries, as demonstrated by native pictographs along its bluffs. The Concho is made up of three branches — the North, Middle and South. Strangely, the South Concho actually flows northward on its journey to meet the other two branches. 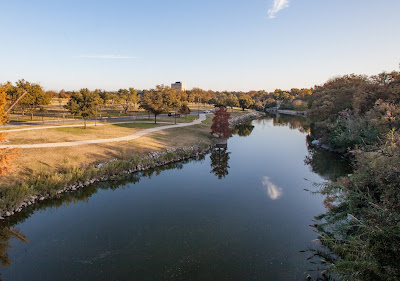 Today the Comal River is mostly known for tubin' and other water recreation. What may be the shortest river in the country, the spring-fed Comal runs a mere 3 miles. Historically confused with the Guadalupe, which it feeds into, the river is named for that most ubiquitous of Mexican cooking utensils, the comal, on which we cook tortillas. This isn't for any attributes of the river itself, but rather of the landscape that surrounds it.

People have a complex history with the Guadalupe River. Artifacts indicate that areas along its valley could have been inhabited as early as 8,000 BC. Tonkawa, Waco, Apache and Karankawa lived along its banks. Europeans first arrived in the late 17th century, establishing colonies and missions in key locations. These rarely lasted long, due to sporadic flooding and conflict with native peoples. It wasn't until the early 19th century that more permanent European settlements were established. It was designated Nuestra Señora de Guadalupe by Alonso de León in the late 1680s.

It's odd that an ill-fated French expedition led by a man from Rouen, displaced to Canada, would be the source of such a Spanish name, but that is the origin of the Lavaca River. Described by La Salle in the late 17th century as Riviére de Les Veches ("river of the cows"), because of herds of bison he saw there, the name comes down to us as the Spanish la vaca ("the cow").

You would think that a river named Leon would have something to do with lions, even though we have no true lions in Texas. As with many early river names, there is some confusion as to the etymology of the Leon River. It may be that it, like the Blanco, was named by the 1721 Aguayo expedition, but is just as likely that it owes its name to explorer Alonso de León.

With the Medina River there is no confusion. This 116-mile river that empties into the San Antonio River was definitely named by Alonso de León. His 1689 diary notes that he named it for Pedro Medina, an early Spanish engineer upon whose navigation tables he relied during his expeditions. 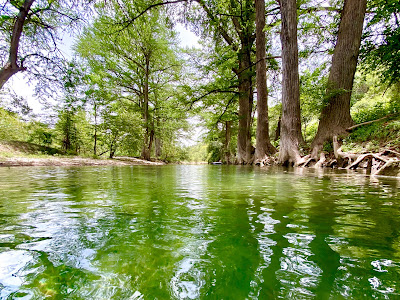 Another river named by Alonso de León, the Nueces River had already been known to Europeans for a number of years. It was prominently displayed on maps as the Río Escondido ("hidden river"), and La Salle sailed to its mouth in 1685 in the mistaken belief that it was the Mississippi. Generations of explorers and settlers changed the name of the river to suit themselves, but the one given in 1689 recognizing its pecan tree-lined banks is the one that stuck.

When you think of West Texas it's hard not to envision the Pecos River. From its headwaters in New Mexico, the Pecos flows more than 900 miles to where it meets the Rio Grande. With a drainage area of over 44,000 square miles, the Pecos was described by early explorers as up to 100 feet wide, 10 feet deep, with a fast current that made it nearly unfordable in all but a handful of spots. While Europeans encountered the river throughout the 16th century and gave it many different names, Juan de Oñate first named it Pecos around 1600, referring to the Pecos Pueblo. The most literal translation would be "dotted" or "freckled," which seems to make little sense. However, some believe it to be a corrupted conjugation of pecar ("to sin"), making us wonder what people saw in its turbulent waters. 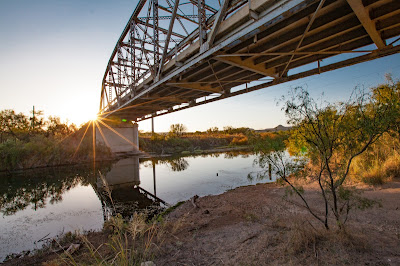 There's only one "r" in the word, although you'd never know it from listening to the way Texans pronounce Pedernales River. Named after the flint rocks (pedernal) found in the riverbed, the river flows through the Hill Country and empties into the Colorado River at Lake Travis. Unlike other rivers that experienced name confusion across generations of explorers, Pedernales seems to have been consistently used since at least 1750.

The origin of the name of the San Antonio River is meticulously documented. Domingo Terán de los Ríos named the river after St. Anthony of Padua on June 13, 1691. Although he was not a priest, de los Ríos was heavily influenced by Father Damian Massanet, who was in charge of missionary action. The river and small native village were thus both renamed, with a Mass for soldiers and natives closely following.

The San Marcos River bears no such written record. Although early explorers named a river San Marcos it's now understood that this was a more substantial waterway, likely the Colorado. Later expeditions called it the San Agustin or Los Inocentes. By the first decade of the 18th century, however, San Marcos seems to have been consistently used to describe the spring-fed river that empties into the Guadalupe. 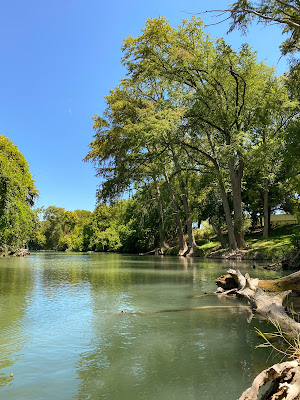 A pristine stream of the Hill Country, the Sabinal River is thought to get its name from the word sabino. If this etymology is to be believed, it's in reference to cypress trees found along the banks of the river. 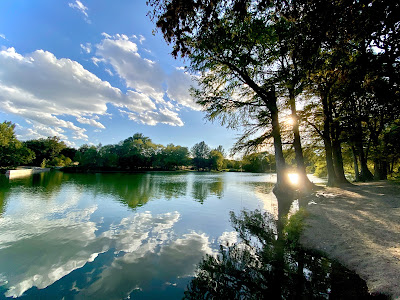 No list of Texas rivers with Spanish place names would be complete without the Rio Grande. The Rio Grande headwaters are in snow-fed mountain springs in Colorado. It flows through New Mexico and, where El Paso and Ciudad Juarez meet, becomes the international border between Texas and Mexico. It curves through remote landscapes, eventually passing along the agricultural fields and orchards of the lower Rio Grande Valley on its way to the Gulf. Called Río de Nuestra Señora, River of May, Río Guadalquivir, Río del Norte and Río Turbio by various people in the 16th century, the most lasting names used have been Rio Bravo and Rio Grande, depending on which side of the border you stand on. Both names date back to 1598 and denote the idea of big, bold and turbulent waters. 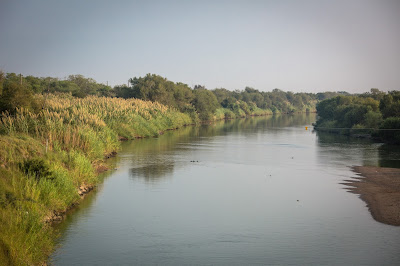 To learn more about the rivers and waterways that course through our state subscribe to Texas Parks & Wildlife magazine. Whether in print or through our mobile app, choose the version that works best for you.