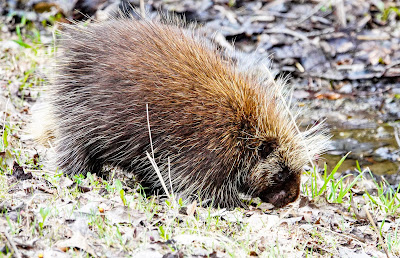 Porcupines are the second-largest rodent species in North America. A native Texan, they mainly reside in West Texas but also occur in the Panhandle and parts of the Hill Country. They can be seen waddling from place to place but can also climb trees.

What makes porcupines the most fascinating is their main weapon of defense — their prickly quills, which are actually modified hairs. A single porcupine is estimated to have more than 30,000 quills, with about 100 to 140 growing from each square inch of skin. The quills cover their entire body, except for their nose, legs and underside.

Quill length typically depends on the quill’s location on the body and the stage of development. Just as an animal sheds hair, porcupines shed quills. Though some depictions of porcupines display their quills as always standing up, that isn’t true. Quills stand vertically only when porcupines feel threatened. Otherwise, they lie flat and hide under a layer of guard hairs. Quills are controlled by muscles, and even the slightest touch can cause a quill raise instantly.

Upon first glance at a quill, the light-colored shaft appears smooth, but touching the sides reveals a roughness at the darker-colored tip. When microscopically viewing the tip, you can see thousands of diamond-shaped scales that overlap and point backward, resembling roof shingles. When the quill enters the victim’s flesh, the scales lie flat, but once inside, they flare open, and their barbed nature makes easy removal almost impossible. 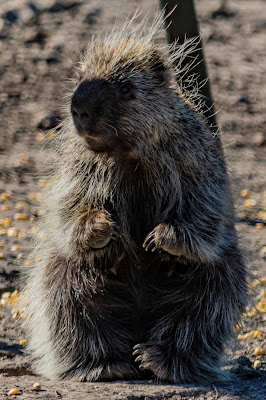 A common misconception about porcupines is that they can shoot or aim their quills at their victim. Typically, when a porcupine feels threatened, its quills will vertically raise, the porcupine will turn around with its backside facing the threat, and it will advance toward the victim in a backward position, hissing, teeth chattering and tail lashing. As the tail violently lashes toward the victim, some of the older quills that are about to shed may accidentally pierce a target. This is purely coincidental — porcupines are not skilled shooters.

When impaled by a quill, it is best to immediately seek professional help or jerk the quill out as soon as possible. The quill, with its barbed nature, can travel further into the victim’s flesh, especially after muscle movement. Porcupine quills have been known to kill animals after puncturing a vital organ or cause blindness if the quill reaches the eyes.

Porcupines mostly dine on trees — twigs, leafs, roots and bark. It is worth noting they are attracted to humans because of their love for salt. Campers have been known to find chewed-up boots, backpack straps or other objects containing salt from sweat.

If unbothered, porcupines are fairly peaceful animals. They are not aggressive and tend to wander alone. If you see one walking by, listen closely and you can hear their grunting, mumbling, murmuring and moaning.

Try to avoid touching or bothering them unless you want to get into a prickly situation.

o learn more about the about the animals that call Texas home subscribe to Texas Parks & Wildlife magazine. Whether in print or through our mobile app, choose the version that works best for you.