You'd be forgiven for hearing the word badger and immediately picturing an imaginary creature living in a tranquil British fantasy countryside. After all, most of us are first introduced to the intrepid creature through childhood tales from The Wind in the Willows or The Chronicles of Narnia.

In truth, badgers reside on every continent except Australia and South America (while the honey badgers of South America are related to badgers, they are not, properly, badgers.) It's just as likely then that the badger you picture actually lives outside of a child's ideal of Britain and instead in, say, Texas. 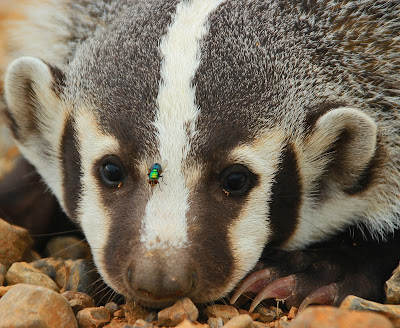 Because they do, in fact, live in Texas. While they are most common in prairies and deserts, where large sections of open ground allow for unfettered burrowing, they can actually be found throughout the state — the sole exception being far east Texas.

They are swift and agile hunters and will often pursue their prey into burrows. As unparalleled excavators, they use their unique skills and fearsome, inch-long claws, to dig through the ground in search of these small mammals, snakes, reptiles and insects.

They have few natural predators, and any inexperienced enough to make an attempt are met with a ferocious defense. Their compact muscular body and loose skin makes them capable of twisting free from the grip of the attacking animal, and those impressive claws and razor sharp teeth are used in combination with loud and vicious snarls and growls, enough to scare away even large assailants.

Badgers are generally solitary, mating in late summer. The female will dig a sett — a multi-roomed tunnel — in which she gives birth to one to five pups in the spring. She'll keep them with her for several months. In the fall they set out on their own solitary lives.

At up to 25 pound and 3 feet long, with a shaggy coats and white striping on the face, the badger is hard to mistake for any other animal. Add to that the strong scent glands common to mustelids, you'll likely know when you encounter this Texas native.