In 1683 thirteen German families from the Rhine arrived in Philadelphia. The date, October 6th, has been celebrated as German American Day since 1983. In fact, the entirety of October is recognized as German American Heritage Month, and Pennsylvania is certainly not the only state that has a claim on German heritage.

The first German settlers came to Texas 150 years after those that landed in Philadelphia. The city of Industry was founded in 1831 by the family of Johann Friedrich Ernst. A man with a somewhat checkered past, Ernst was born in Lower Saxony, served as a quartermaster, fought against Napoleon, and seemingly embezzled a large sum of money from a public post before fleeing with his wife and children to America. Originally arriving in New York, Ernst made friends with fellow German Charles Fordtran, who hailed from Westphalia. The two made the decision to move further afield with Missouri as their destination. On the way, they read rave reviews of Austin's colony and changed direction. Instead of Missouri, the schooner Saltillo delivered them to Texas. 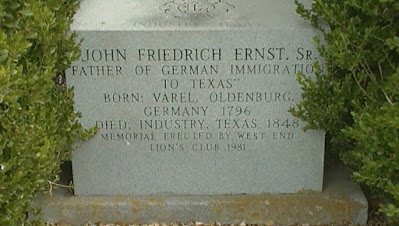 Ernst and Fordtran obtained land in Austin's colony and a letter sent by Ernst to relatives in Germany extolling the virtues of this new land went viral — at least the 19th century version of viral. Copies of the letter apparently circulated throughout Germany and encouraged further immigration. Whether the influx of more Germans had been his intent or not, Ernst proved to a generous benefactor. He opened his home as a boardinghouse for new emigrants, sold lots partitioned from his own land, provided knowledge and resources and earned the nickname the "father of the immigrants."

Industry was the first German town in Texas, but it certainly wouldn't be the last.

Organized emigration of Germans began with the creation of the Verein zum Schutze deutcher Einwanderer in Texas (Society for the protection of German immigrants in Texas), commonly known as the Adelsverein, in April of 1842. Twenty-one members of the German nobility formed the society with the express purpose of establishing a Germany colony in Texas by encouraging and enabling mass emigration. 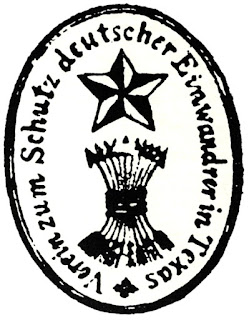 Members of the Adelsverein came to Texas in 1842, conferred briefly with President Sam Houston about the possibility of a frontier land grant, and instead purchased thousands of acres near present day Round Top. Further purchases in 1844 and 1845 added millions of acres for settlement between the Llano and Colorado Rivers, and near Comal Springs.

While many German towns, including Bettina, Castell, Leiningen, Meerholtz and Schoenburg, were established on this acreage, New Braunfels and Fredericksburg were definitely the largest from the beginning.  In the span of seven months over 5,200 Germans made the arduous ocean voyage , disembarking in Carlshafen (which later became Indianola, which later became a ghost town after two hurricanes and a massive fire destroyed the town and port in the late 19th century) and traveling overland to their eventual destination. 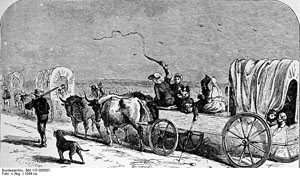 The Adelsverein is something of a curiosity today. The intent of its founders was philanthropic, but also commercial. By providing lands and means of emigration to German workers they hoped to ease economic pressures in Germany. At the same time they believed that German settlers would be the source of both raw materials for production and end-consumers for the goods produced. But the project was beset by poor planning and economic mismanagement. In the end their intent of a new Germany within the confines of Texas failed, but it left behind vibrant German communities that still exist today.

Additional settlements cropped up as the years went by. The city of Castroville became the center of Alsatian culture in Texas due to the colonization efforts of Henri Casto that brought 2,000 settlers to the area in 1844. The community of Serbin was founded by some 600 Wends. Throughout the 1850s the population of German-born Texans more than doubled, reaching over 20,000. The German Belt in Texas was firmly established.

Immigration came to a standstill during the Civil War due to blockades of Confederate ports, but as soon as the war was over the Galveston wharves saw more German passengers disembark.  In the 25 years after the war ended, more Germans arrived in Texas than had arrived during the entirety of the early colonization period — an estimated 40,000 new immigrants. They didn't all end up in the established German towns and settlements. Some ventured further afield, and German "ethnic islands" existed in North Texas and on the high plains of West Texas.

By the 1890s German immigration to Texas was winding down, and most arrivals were from other states rather than from Germany itself. But those first, intrepid settlers that had already arrived left their mark. Roughly 17% of Texans claim German ancestry today, and their heritage and culture are commemorated in celebrations, food and language.

But let's save those for other posts.