Don't call them pigs just because the nose looks similar. In this week's Mammal Monday our Editorial Intern, Landry Allred, explains the history of our own native rooter. 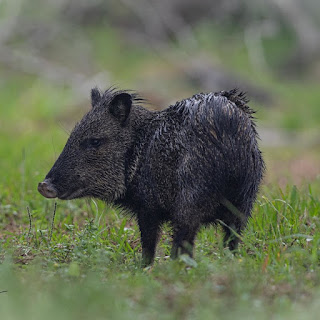 Out in the Texas prairies, woodlands and brush country, almost anything that’s small and stout can look like a pig. But everything is not always what it seems.

Certain pig-looking animals — peccaries — are spread throughout the southwestern U.S. to South America, occurring in three different species. The collared peccary, or javelina, is the only species of peccary that can be found in the United States. An estimated 100,000 javelinas occur in Texas rangelands, living mostly in arid areas.

Despite the common misconception of being a type of swine, peccaries are classified in a family of their own. The most recent shared ancestor with swine is estimated to be around 40 million years ago.

While pigs were developing in the Eastern Hemisphere, javelinas were developing the Western Hemisphere. Early Spanish explorers found them in the New World, naming them jabeli, an Arabic-Spanish word for wild boar, or jabalina, Spanish for “spear” as the animals have sharp teeth. The first documented sightings of javelinas in the New World occurred in the 18th century, and archeological evidence puts their earliest appearance in 1700.

Many people often confuse feral hogs and javelinas, though they are not in the same family. Javelinas are much smaller than feral hogs. They also have three hoofed toes instead of four, an unnoticeable tail, fewer teeth and a scent gland near their tail base. Javelinas are also much more social, herd-like animals.

The well-known negative impacts from feral hogs may lead people to have negative associations with javelinas. Feral hogs destroy habitats by digging and wallowing, but javelinas rarely dig deeper than a couple of inches when looking for food. Additionally, while feral hogs often compete with native species for resources, javelinas feed mainly on prickly pear cacti and other succulents.

Aggressiveness is another characteristic typically associated with javelinas, but javelinas are pretty defensive and will usually retreat from danger. The only time they will act aggressively is if they are cornered or when interacting with dogs, as dogs resemble the javelina’s typical predator, the coyote.

Some people claim that javelinas will charge toward them; however, they are most likely running from a perceived threat. Javelinas have poor eyesight, so when they are scattering from danger, they may look as if they’re charging. All things considered, aggressive encounters between javelinas and humans are rare.

The hunting regulations for feral hogs and javelinas are completely different, so it’s helpful to be able to recognize one from the other. One way to identify javelinas is by the white stripe of hair around their neck, resembling a “collar.”