The word rodent generally has a negative connotation. We've been conditioned to associate it with vermin that carry disease and infest domestic and commercial buildings. But the order Rodentia is a massive one, with members that fill practically every habitat on earth. And despite an irrational antipathy towards rats and mice, people can't help but be captivated by the social nature, curiosity and interesting behaviors of the wide variety of rodents found in nature.

Case in point — the Prairie Dog. 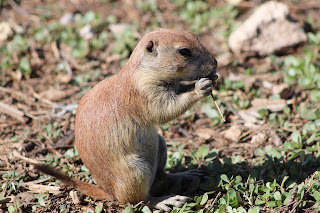 Even if you've never seen a colony of Black-tailed Prairie Dogs in person, you've likely seen them featured in documentaries or on a much smaller scale in zoo exhibits. The thing you'll notice immediately is that they never seem to be alone. Prairie Dogs are extraordinarily social animals, with an amazingly structured society. Their "towns" are complex undergrown burrow systems that span hundreds of acres of Panhandle and West Texas soil. Each town is made up of wards (think suburban subdivisions) and within the wards are multiple coteries — extended families made up of an adult male, a group of females and young offspring.

Territory within the burrow complex is based on these coteries and wards. Specific burrows are for their own use and recognition is an important aspect of all social interaction.

Two individuals coming upon one another will bare their teeth and touch them. If one isn't a member of the coterie it's a swift goodbye! If the two are from the same coterie the teeth touching becomes more extended, likened to kissing, and then play generally ensues. It is their playful antics that make Black-tailed Prairie Dogs so engaging to watch. They nuzzle, wrestle and groom each other, reinforcing the bonds of their coterie.

Of course, one of the behaviors that makes them so endearing isn't a play behavior at all but rather an alarm. Prairie dogs foraging outside their burrows are constantly in communication with one another, alert to the dangers presented by their many predators. At least one sentry will remain on duty ready to cry out an alarm at the first sign of danger.  The others then run back to burrow openings and take up the warning call, dashing into burrows if the danger is extreme. 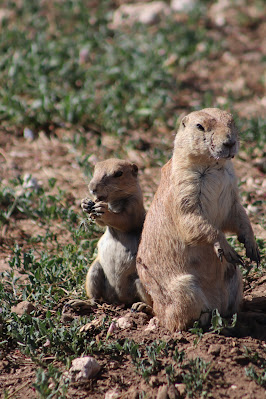 The Black-tailed Prairie Dog is relatively common in the areas of Texas where they are still found. But the numbers today represent less than 1% of their historic populations. This is due primarily to habitat loss to ranching and farming. They remain, however, a keystone species. Other animals depend on them for shelter — burrowing owls, endangered black-footed ferrets, and a various fox species all co-opt their burrows. And of course they are an important prey item for rattlesnakes, hawks and coyotes.